Tour de France Grand Depart 2014 is almost upon us 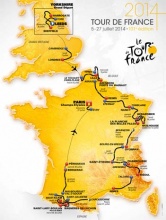 In just a few short days, Tour de France Grand Depart 2014 will begin. This weekend 22 of the world's top cycling teams will compete across 3 days covering a total of 546km throughout various locations in the UK. There will be 3 stages in the UK including Leeds,Yorkshire and Cambridge before the tour reaches French soil. In France there are a further 18 stages of the tour. The first stage sets off at 11am on Saturday 5th July in Leeds.

The second stage takes place on Sunday 6th July and riders will start at York and cycle down to Sheffield. The second day is the hill stage and cyclists will have many inclines to tackle throughout the ride which is 201km, the longest of all 3 stages. This route takes riders across to Addingham, down to Huddersfield and continuing down to Sheffield.

The final stage of the route follows on Monday 7th July starting at Cambridge and cycling down to London. Stage 3 is 155km, the shortest of all the races. During this route, cyclists will travel down through Finchingfield and continuing to Chelmsford, across to Harlow and leading down to London. The last route, similar to the first is predominantly flat and in comparison to stage 2, the final leg will be less challenging on a flat, shorter route to finish off the tour.

Prior to the event starting, on Thursday 3rd July there will be an opening ceremony held at Leeds arena. The evening will feature music from Alistair Griffin and Kimberley Walsh, who will together perform the official anthem of the Tour de France, 'The Road' along with band, hope and social, Ghost Peleton and Opera North who will perform opera conducted by composer Philip Sheppard, who also composed during the London 2012 Olympics. The opening event starts at 5pm and finishes approximately 8:45pm.

Throughout the 3 days there will be designated spectator hubs along various parts of each route for more information on these spots and general information regarding the event, see the Tour de France website.