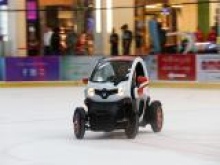 Renault has teamed up with Formula 1 drivers and The Dubai Mall to make an original film featuring Renault Twizy, a car which uses technology from the world of Formula One. Avant-garde design, fun to drive and easy to recharge, Twizy is the first electric car available in the U.A.E.

Through the electrically-powered car the drivers raced down the alleys of The Dubai Mall, while visitors were gazing at the unusual scenes. From the Fountains to the Aquarium and even the ice rink, drivers went around iconic places of the famous Mall.

Renault Twizy has definitely charmed Lotus F1 drivers and the visitors of The Dubai Mall!

Renault Sport F1 and Technologies has contributed extensively to the birth of the Renault Twizy. From the very beginning of the concept, its mission was to imagine an ultramobile for two (TWIN) which was both intuitive and simple to use (EASY). Twizy took form at the heart of Renault’s motorsport division. From the initial briefs for the chassis and performance characteristics which were drawn up by Renault Sport Technologies, to the tuning of its motor and reliability running on the same dynos as the F1 team’s engines, the Twizy’s development was in expert hands. In addition to the strengths concealed by the model’s unusual forms, this distillation of technology features active and passive safety systems worthy of the newcomer’s Renault heritage. Thanks to its light weight (450kg, including batteries), the surprising acceleration of its electric motor (13kW, 57Nm) and the opportunity it offers for driving in the open air without a helmet, the Twizy is a unique concept – which is poised

to make its natural environment – built-up areas – even cleaner and safer places...

Present in Formula 1 since 1977, Renault has won 12 Constructors’ World Titles and 11 Drivers’ World Titles, plus more than 200 pole positions and 150 wins as an engine supplier. The current power plant, the Renault RS27, is a 750bhp V8 engine, in use since 2007. The engine is supplied to four partner teams – Infiniti Red Bull Racing Lotus F1 Team, Caterham F1 Team and Williams F1 Team.

About the Renault Group

The Renault group has been making cars since 1898. Today it is an international multi-brand group, selling more than 2.5 million vehicles in 128 countries in 2012 and employing nearly 128,000 people. To meet the major technological challenges of the future and continue its strategy of profitable growth, the Group is harnessing its international development and the complementary fit of its three brands, Renault, Dacia and Renault Samsung Motors, together with electric vehicles, the Alliance with Nissan, and its partnerships with AVTOVAZ and Daimler.